Restrictions:
Turkey league:
this season the number of teams participating in the Turkish league is 21 teams, but the game cannot handle more than 20 in this league, we have moved one Turkish team to the Danish league.
Denmark league
in season 20/21 the number of teams is now 12 instead of 14, the game must find 14 teams otherwise there will be problems in the master league, we have added the extra Turkish team and a Norwegian team to complete the needed number in this league.
MLS
the game cannot have more than 20 teams in this league, we have moved the extra 6 USA teams to other American teams so the game would not have errors in football life modes.
ACL league
in pes21 this league is located in the main database of the game, in pes20 (and all previous versions) this league needs to be in a separated database level, this resulted in these teams missing some players especially players who play in a national team, meaning the players in these clubs that also play in a national team are not assigned to the club, this is to avoid duplications and bugs.
SP20 Addons compatibility:
Sider addons:
all the sider sp20 addons can work with this version, except the addon (CL kitserver) that should be removed because it will make the kits old, this addon will need a new version.
Unlock legends:
this addon is version specific, the current version of this addon will not work with this new patch, a new addon is needed.
Goal Songs:
this addon is no longer compatible, it can be used but any team with a stadium server assignment will not have this addon.
the other addons should work fine, some will get new versions, be sure to read the details of the addon to have any needed information about the addon and its compatibility.
SP20 General Features

- compatible with the latest game data-pack
- ready for season 20/21
- all players have real names
- all teams have a real name and logo
- all teams have real kits
- all teams have the correct stadium name and rivals
- all leagues have the correct name and logo
- removed duplicated teams
- added new managers
- added new teams
- added new national teams
- added new leagues
- added new classic teams
- added a lot of real faces (addon)
- added a lot of mini-faces (+20k)
- added real balls
- added 100 boots and 30 gloves
- many others...
Teams and Players
currently, our database has 741 total teams including hidden, classics teams, and expansion teams, the database includes around 25000 players, all real players except the players in the editable teams, no duplicated teams or players, players stats are from the latest Konami live update, we constantly keep updating the transfers and adding players if possible.
all the players and players added with their original game ID, if a player or a team does not have one then we assign a temporary ID until is added in the game database.

two teams remained fully editable, pes united (Zalgiris Vilnius) and we united (Ceres Negros), you can use these teams to make your own, it is possible to export the team and import it when we update the patch, see tutorial section.

for ID reference, our database is available HERE

Leagues
all the leagues are up to date for the current season, created all the promoted teams, fake leagues replaced with real leagues (MLS, J1 League, Bundesliga)
Managers
added more new master league managers to choose from.
managers available:

Graphics
all the graphics files we create for best quality and performance at the same time, with the lowest file size possible for high quality, the graphics (emblems, logos, boots, balls, backgrounds) are all compatible with 4K resolution without losing quality. while consuming the same PC resources as the original game.

special graphics applied in SP20, you can use the switcher to remove the graphics and/or the scoreboard for default Konami graphics.

Stadiums
the stadiums in the smoke patch are default game stadiums, updated from the most recent game data pack, you can add more from addons.

Kits (team shirts)
we create and update kits constantly, all the teams in the smoke patch have real kits, most of the kits are of the current season, we keep updating the kits and include the new contents in updates when we have sufficient new files ready.

Addons
there are many more options you can add to smoke patch, check the addons section of the website, the addons are being upgraded periodically and we plan to add more options in the future.
be sure to read carefully about any addon before using it to know more about its functionality and compatibility.

Switcher
a small switcher tool is included for various functions, located in the game folder, be sure the game is not running if you want to use this tool.

* all original game DLC files are needed if the patch is deactivated for online mode.

2- Run (smokepatch20.3.0.exe)
run the installer and choose the game installation folder, the patch must be installed in the same game folder, be sure you don't get errors, and that the installer finished successfully.

3- Copy the Edit file
manually copy the edit file (edit00000000) that comes with the latest update, replace the file in the save folder of the game in documents.
* same instructions for patch update if available.
* more detailed installation HERE
* for steam users, deactivate live update in the team select menu, see the picture: 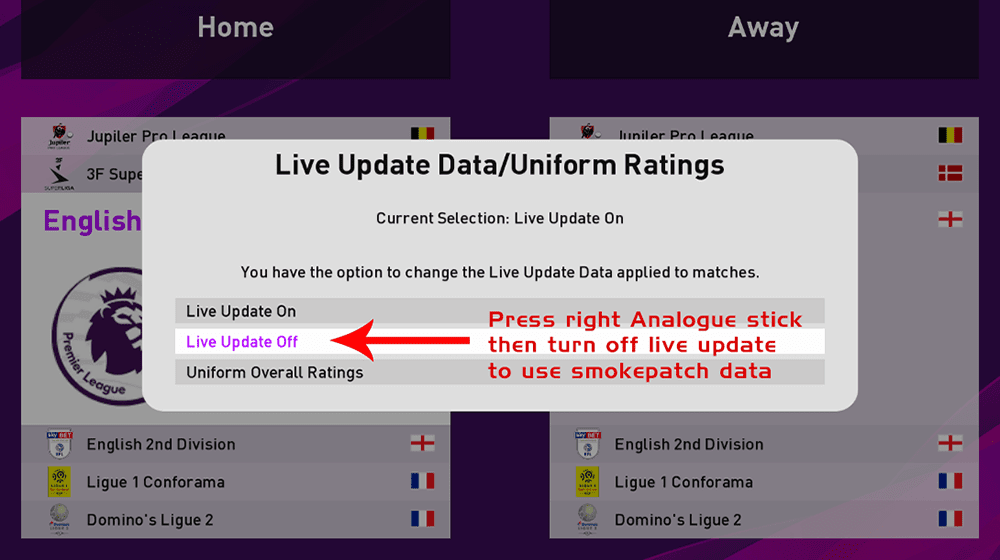 - this patch is made to focus on offline modes, to play online or my club use switcher to deactivate the patch and restore the default game
- changing the patch files or adding other mods is at your own risk.
- this patch is tested on the full original game version
- this patch does not include the game, we assume that you have bought and installed it.
+ Download Links:
How to download SP free links
Full 20.3.0 (4GB)
part 1

Home
Give us your opinion